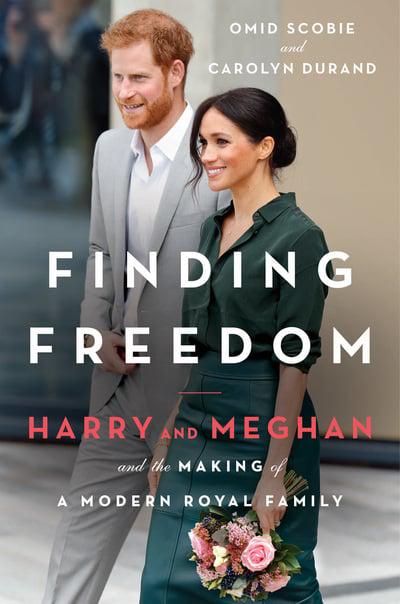 The updated paperback release of Finding Freedom Harry and Meghan

Last year, I wrote a review of Omid Scobie and Carolyn Durand’s sycophantic tribute to the monumental philanthropic force of nature that is known as Meghan, Duchess of Sussex. Remember her? Yes, she was the one who married Prince Harry and attempted to drag the Royal Family, albeit kicking and screaming, into the Twenty-First Century. The kindest, most intelligent, most gifted, most modest, and most beautiful woman that ever married into The Firm. Even greater in her selflessness and need to contribute to a life of Public Service than Her Majesty the Queen. Not only that, but she just happened to be an expert at packing.

With Meghan’s god-like ability to walk on water and the authors’ tendency for obsequious prose, it seemed inconceivable that they could flatter Meghan and her husband any more and yet this is just what they manage to do. The recently released paperback version claims to include exclusive new content but is little more than an additional twenty-five pages of yet more fawning.

In addition, the authors wade through every major newspaper headline relating to Brand Sussex from when the hard-book version was published and seek to add their own spin or justification. Now is the time for truth. Again, we witness the same unerring splitting of infinitives and reliance on sweeping generalisations, clichés, and hyperbolic language that a judge once declared to be the Duchess’s preferred style of writing. Of course, this firmly puts paid to the couple’s remonstrations that they did not cooperate with the authors on the writing of this book.

The new chapter begins with an explanation of why the Sussexes agreed to an interview with their ‘close friend’ Oprah. It was in response to the fact that the couple rarely had the chance to speak publicly and after so many “months of maintaining dignified silence.” They were finally “ready to open up.” No subject was off limits. It was a case of “now or never.” The “shackles of the institutions ‘never complain, never explain’ mantra were off. It was time to be honest, once and for all.” The authors reinforce how good Meghan and by association, Harry are, firmly adhering to coronavirus measures such as social distancing and avoidance of hugs.

We then learn how the couple settled into their double-gated community in Montecito where the importance of a secure home to raise their family was paramount. But just when they were on the verge of being accused of living privileged lives, we are told that Harry and Meghan are just “like nearly all average couples” because they have a mortgage. Of course, they are just like us. For don’t we all live in nine-bedroom, 18,671 square foot properties with 7.4 acres of land?

Furthermore, we are told that in May 2020, the couple celebrated their second wedding anniversary and, in their celebrations, yet again they are so like all of us because they made sure to adhere to the tradition of buying each other an item made of cotton. In a rare departure from their charity work, they celebrated with a take out of Mexican food and margaritas – non-alcoholic for Meghan because she is perfect and such a stickler for following rules and would never wish to be criticised of endangering the future of her unborn child by drinking in pregnancy. Of course, immediately after this incredibly rare episode of frivolity, they were soon back to their self-less lives of charitable work helping the vulnerable by distributing food, planting forget-me-nots with children at a nursery in an homage to Diana and holding conference calls for their many charities. The public are totally unaware of just how much work they do because they are such modest and private people. Well, the public certainly know now!

The book then goes on to talk about a miscarriage Meghan suffered in early summer of 2020. Inevitably anyone who has been through a miscarriage knows how deeply upsetting and traumatising this can be and having experienced this myself, I would not wish such an event on anyone. However, yet again we are told how unselfish Meghan is because she used her awful experience to help others by speaking out and raising awareness. All Meghan ever does is think of others and how she can help.

The authors then go on to detail what an incredible marriage Harry and Meghan have because they are soulmates. Harry continues to show his dedication to veterans and service personnel despite the obstacles created by his family such as refusing to display a wreath he sent for Remembrance Sunday. The courtiers inside ‘the institution’ as they love to call it, actively undermine Harry and Meghan by deliberately leaking information in an effort to discredit the couple. (Excuse me though, isn’t that what Harry and Meghan are doing in this book?) This includes such allegations that dear, sweet Meghan has bullied palace staff and wore earrings gifted to her from a Prince who ordered the brutal execution of a journalist. Almost every derogatory headline written about Harry and Meghan is dealt with and discredited as being little more than a direct assault on the Sussexes because everyone is just so jealous of their stratospheric success.

Eventually this additional chapter reads little more than a ‘tit for tat’ or ‘he said, then she said.’ The mentality is that of a petulant teenager seeking to justify themselves, feeling they are always the victim. It is rather tiresome and in truth, downright boring. In all honesty, with its constant woe is me, self-indulgent belief, who really wants to read this? If Harry and Meghan really wish to be admired for their public service, then wouldn’t they do better just to get on with it and stop moaning? The couple seem to contradict themselves constantly . They want people to pay attention to their endless self-promotion and yet they want privacy. They are forever telling people to be kind and yet at the beginning of the year they sat down with Oprah and launched an attack on the Royal Family at a time when Prince Philip, the ninety-nine year old head of the family was dying.  They consider themselves eco-warriors and yet Harry recently took a private jet to play in a polo match. They love to lecture on every issue and sadly much of it follows the belief of “do as I say, not as I do.”

These additional 25 pages of saccharine-sweet exaggeration and word salad bring to mind a comedic parody of a megalomaniacal character. In real life no one is ever perfect and yet we are constantly being made to believe that the Duke and Duchess of Sussex (and the Duchess in particular) are.  No one can be this whiter than white, this faultless and the constant reinforcement of their ineffable qualities makes the book farcical. Thank goodness we have William and Catherine who manage to demonstrate what a life in public service should be or else this preposterous collection of truth bombs would really be cause for concern.

You can find out more here.