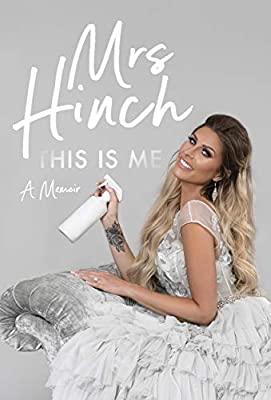 However, what subsequently transpired from reading this book was not so much a switching off of the brain, but more a total cerebral atrophy. Mrs Hinch, aka Sophie Hinchcliffe, lives in a ditzy world of fairy tales, unicorns, and rainbows. She is still very child-like with her love of dot to dot, fluffy pens and making things look pretty, not to mention wanting her mum to tuck her into bed at night. I am sure in real life that Sophie is charming and engaging, but as I frequently reiterate, it is the book I am reviewing, not the person.

This book is written very much in the exclamatory style of a young girls’ magazine and by young girl, I am talking primary school or more precisely, infants. It is reminiscent of how children write their regular Monday morning literacy task of ‘what I did at the weekend;’ simple sentence structure with generalised basic vocabulary such as ‘nice’ and ‘amazing’; continual repetition of “and then I did this and then I did that”; and overall, a lack of substance.  The style is banal and at times downright boring and comes complete with the usual Gleam editorial trademark of splitting infinitives and making up punctuation rules. Who really needs to know what she had for lunch at junior school, or how she played with her Barbie dolls and dressed them in baby clothes from the charity shop? At times, the conversational style feels as interesting as staring at a blank page for hours. I felt guilty at finding it so utterly devoid of interest and was desperate for the book to metamorphosise into something with even a vagueness of purpose. I was waiting for a spark to ignite my interest and make me want to read on, but it sadly never occurred.

If Chaucer were writing his Canterbury Tales today no doubt, he would relish the opportunity to depict the modern day phenomenon of the influencer. That much fabricated, envied and reviled trade that in some appears devoid of integrity. I am sure Chaucer would have relished exploring the duplicitous nature of such a career. Mrs Hinch, with her footballer’s wife appearance, would be the ideal embodiment of the profession, which requires merely a generous stroke of luck as its primary qualification. The world of brand deals, and ‘hashtag gifted.’ The world where one sells one’s soul for a slice of fame and never-ending freebies. Oh yes, Chaucer would have loved Mrs Hinch. Like many of Chaucer’s characters, Mrs Hinch is flawed. The industry in which she is in requires her to have a skin as thick as a rhino and she is far too fragile a creature with crippling anxiety. It is no wonder that she finds it so tough.

Sophie struggles with many obligatory aspects of the influencer world; an entire chapter is given to the topic of trolls and trolling. This is once again not dissimilar to many Chaucerian characters who like to labour a point with the objective of stressing their supposed hard lot in life. To Sophie, the definition of a troll is wide to encompass anyone who questions her fluffy, spangled world. Trolls are not just those who seek her out and send awful messages and threats, but pretty much anyone who does not like her, as well as those who critique her and those who feel that she is not adhering to advertising standards. As much as I empathise with her experience, and deplore anyone who seeks to upset someone online, this is where I feel that she makes a fundamental error. Whilst I have neither the time nor inclination to seek out these sites where people slag off celebrities and influencers, then there is a difference between expressing your opinion about someone on a forum and then deliberately sending malicious comments. As the late Terry Wogan famously said, you will always encounter the same amount of people who dislike you as like you. It is a necessary part of playing the fame game. Sophie admits that she goes onto these gossip sites deliberately to see what people are saying about her and this causes her a great deal of upset. Surely the answer to this lies in following her husband’s advice, just to stay well clear in the first place.

Sophie also does not shy from the many downsides, as she sees them, of being an influencer. Her cup may runneth over with freebies and offers from brands, but Sophie believes that she has ethics. For example, she only partners with companies she has used in the past, and she turns down many jobs which do not fit in with her brand. Sophie prefers to be at home rather than out on the red carpet at events and that is something quite laudable, as is the fact that the support of her family enables her to remain grounded. She talks at great length of how difficult it is to go out and be recognised by people who want to have their photo taken with the Mrs Hinch. In Sophie’s opinion though, fame has led to challenges since she now has to stay in private villas on holiday instead of in all-inclusive resorts. Then one must not forget the utterly horrifying aspect that when people give you things for free, surprisingly they seem to want something in return. I look at her complaints and consider them from the viewpoint of a nurse who is working an 18 hour shift; a care home assistant dealing with an outbreak of Covid; or a single parent struggling to make universal credit last to feed their children and I do lose sympathy. I do not think there is any maliciousness in Sophie’s list of complaints. She is always aware of how fortunate she is to be in her position and to have such a faithful army of followers. There is ample evidence that she gives to charities and passes on many products and clothing to those in need. But I do think this shows how influencers are living in an ivory tower and really rather ignorant of the reality many of their fans are facing.

Sophie’s unremitting justifications to her critics show her lack of education and understanding. There have been complaints about her impact on the environment. Many of the cleaning products she promotes come in single-use plastic and there are further concerns that the household cleaners she uses impact on marine life, once flushed down the drain and into water treatment centres.  To Sophie, looking after the environment equals recycling. She claims that she does ‘proper’ recycling now and that should satisfy her critics. Yet there is more to looking after our planet than just recycling. Furthermore, Sophie has also been accused of taking women’s rights back to the Fifties. For years women fought to be emancipated from the drudgery of housework and here is someone encouraging women to see the fun in a scented disinfectant.  Her response is ‘well, I have some male followers.’ Her response illustrates the extent to which she frequently misses the point.

I am sure Mrs Hinch’s followers will love this book and their brief foray into Sophie’s World of stardust and moon beams. And I do not blame them, for it is a world that many people would prefer to be in at the moment. Just like Chaucer’s Pardoner selling his fake relics in The Canterbury Tales, I am certain Mrs Hinch will continue to sell her Minkies, her wax melts, her Shark vacuum, her Febreze and of course her books, for a long time yet. But as for me, unfortunately this is one of the few books I regret wasting the time on reading. I am now in need of some sort of injection to restore my brain cells. Perhaps something more cerebral and challenging?  Now, where did I leave my dot to dot?

3 thoughts on “This Is Me by Mrs Hinch. A Modern Day Morality Tale.”