Terribly sad news earlier this week, when the Cothill Trust announced that it was closing Ashdown House Preparatory School in East Sussex because of financial difficulties caused by the corona virus. The closure was reported in the Daily Mail since its alumnae include Boris Johnson and Damien Lewis. Rachel Johnson wrote her own tribute to the school yesterday. As a boarding school and with so many of its pupils going to such illustrious schools as Eton and Harrow, it was considered incredibly prestigious. Princess Margaret even sent her son, the current Lord Snowdon there.

You may wonder why someone who lives in Yorkshire, teaches part-time and is a writer should have any interest in the place whatsoever. Well in what now seems a former life, I lived and worked at Ashdown in the early noughties and although it was a very difficult time for me personally, I have a great deal of affection for the place where I looked after a house full of prep-school boys and taught a Year 3 class.

Benjamin Latrobe, who also designed the White House, built the grand grey stone main building, where I lived. The immense grounds included rolling lawns, a ‘jungle’, and playing fields for all manner of sporting activities. I was told that the school had taken out a special insurance policy since it encouraged the children to climb trees and make as much rough and tumble as possible. Their uniforms were designed specifically for this with thick blue cord trousers for boys and girls and a polo neck and sweatshirt.

Many people have often said to me that you must really dislike your children if you send them away to board. This is most certainly not the case at all. Boarding school is expensive – I think fees were in the region of £30 000, – but we had many children whose parents worked in Hong Kong and wanted them to be educated in the British system. Others moved around a great deal with work and wanted consistency for their children. There were others who might have a child, who was a gifted musician, and their job did not enable them to ferry their children around for after-school activities. Boarding school is not the preserve of the rich. Admittedly, some were very wealthy and there were aristocratic families. But many were on scholarships or bursaries. Boarding schools are registered charities and have to give away a certain amount of places to maintain their charitable status. It is not correct to say that everyone who goes to boarding school is from the same privileged background.

My days were long, and it felt more like a way of life than a job, I would get the boys up, go to breakfast and chapel with them and then teach my class. I would have the luxury of some free time in the afternoons whilst the children were doing sport, then from 5pm it would be tea, activities and finally, bed time. If a child was ill during the night, then I would often have to deal with it. I worked six days a week including weekends. Colleagues became friends and it was vital to fit in. Working and living in such close proximity meant that I forged some incredibly strong relationships.

At the time, my son was incredibly young, and he was adored by all the boys in my house, as was my three-legged cat, Tiggy. But one night when my son had chicken pox and was really struggling, we had a fire alarm at about 1am. I had to get him out of the main house along with about forty boys and then register them in the theatre as part of the drill. It was freezing cold and snow and sleet were pelting down. It was this experience that made me realise I had to leave boarding schools for day schools if I was going to be the parent I wanted to be. I could no longer live in the goldfish bowl.

Of course, there were perks. I lived in a four-bedroom wing of the main house. I think my dining room had more space than my current house. It was said that Princess Margaret herself had once gone onto my balcony to look at the landscape and had remarked, “It reminds one of Africa.” Damien Lewis, a former pupil, was at that time a school governor. He had once inadvertently walked into my flat and bumped into me. I can still remember his charm and how much more attractive he was than I expected. I never had to worry about cooking endless family meals like I do now. I had a cleaner and all my laundry was done for me, which to me would be worth thousands today! I had no bills to pay either. The school had a lovely sense of community with many spectacular occasions. My favourite was singing carols around the immense Christmas tree. Holidays were long and when the children were away, we had free use of all the facilities including an Olympic sized swimming pool.

My years spent working in boarding schools seem like an age ago now. I would not want to go back to that style of living because I enjoy my free time spent with my family. At the end of the twelve-year period, I felt very much like Mr Benn being called back to normal life after having experienced a great adventure. If I had remained there, then I doubt I could have gone onto have my daughter or follow my passion for writing. Yet there is still a bit of Elisabeth left behind at Ashdown, along with the person I used to be. And that is why like an old friend, I shall mourn its passing. For the life I left behind. 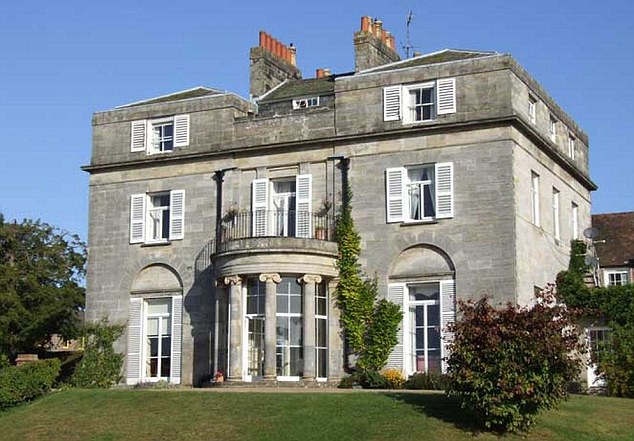