One of my favourite films has to be the 1997 Italian film directed by and starring Roberto Beningi, La Vita è Bella. The film is set during the Second World War. Benigni plays, a Jewish Italian  bookshop owner named Guido Orefice, who uses his imagination to shield his son from the horrors of incarceration in a Nazi concentration camp. The film was inspired by Benigni’s father, who spent two years in a German labour camp during World War II.

The key theme of this film concerns Guido and his very young son, Giosuè, entering a Nazi concentration camp. Guido hides their true situation from his son by claiming that the camp is a complicated game in which Giosuè must perform the tasks Guido gives him. Each of the tasks will earn them points and whoever gets to one thousand points first will win a tank. Guido tells Giousuè that if he cries, complains that he wants his mother, or says that he is hungry, he will lose points. Yet if he keeps quiet then he gets extra points.  It is an incredibly emotional film and it shows more than anything, that humans can get through periods of adversity by having a positive mental attitude towards something, even facing an experience as horrific as being in a concentration camp. It is an attitude that sets such a wonderful example to us in these times of crisis.

My daughter was speaking to my Dad the other day on the phone about how her school is now closed and she will not see her friends for a while. My daughter is someone who enjoys socialising and I thought that being apart would hit her hard.

“It’s quite exciting times, Grandad.” She explained,” I mean when I get older, I can tell my children about life during the hard times of the Corona virus in 2020.” 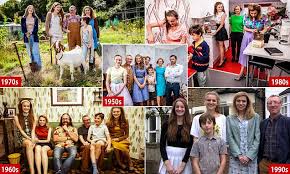 She loves watching the television series Back In Time for Dinner, where a family live through decades gone by, to understand more about the past. “I’m really looking forward to the day they will do a programme on what we had to do to get through this.”

In the 1970’s, we went through a crisis of the Three-Day Week, in a bid to conserve electricity.  We also had many strikes during the Seventies when we were forced to endure long periods without electricity. I can clearly remember this period. I was only very small, but I remember it much more than I remember most things these days! My Mother made it into a game for us children, pretending that we were trying out what it was like to go camping. We would have candles to light our way, but we would make toast on the fire, which tasted delicious. I can recall us all reading by candlelight in the back-living room. It never felt like hardship to me, more an adventure.

I am sure that many of us are struggling to adapt to a new way of living. Many people need to consider the elderly and vulnerable, who are forced to self-isolate, especially those such as my Dad who live alone. It is only a matter of time before we will all be required to remain in our homes. Yet, already news items are reporting the actions of people desperate to help and support others through these times. People with the right positive mental attitude. I have seen many examples of people mucking in together. Those who are teaching keep-fit online, offering to go out and buy groceries or collect prescriptions for people unable to get out. It is true that there are some who are being selfish by not socially isolating or others who are being greedy by profiteering from products in short supply. However, the examples of the positive good deeds give us consolation that in spite of the terrifying prospect of Covid-19, most humans have empathy and consideration for others.

We have no choice but to get through this period as easily as we can. I must say that I have found life a lot easier since I stopped continually watching the news on the television and switched to the radio instead. It’s important to ensure that you only gain your information from trusted and non-sensationalist providers such as the BBC and the World Health Organisation.  Social media can be incredibly beneficial during this period as we have seen with keeping in touch with people. However, it is vital that you don’t start listening to some of the stories claiming to be the words of, a friend of a friend of a friend.

I find it incredible that some things that mattered so much to me ten days ago, now have absolutely no importance at all. I started an Instagram account for my book on Princess Mary. Ten days ago, it really mattered to me how many new followers I had and how quickly I was receiving them. I’d look at the page every few hours to see how it was going. Today I haven’t even looked at the page. Similarly, before this started, it was vital for me to get my nails done every fortnight and have my hair dyed every six weeks to cover the grey. I literally obsessed each time I could see a grey hair coming through. Now the prospect of my entire head being grey does not bother me in the slightest. I’ve no intention of doing anything to my nails.

We are learning lessons during this period which we will never forget. We are learning the importance of our loved ones. How many times have we wished that we could spend more time with our families? How many times have we wished that we didn’t have to commute to work? This new way of living and working from home may lead to future changes. For example, the GCSE system of exams is frequently considered unfair because final grades are exam based and many students struggle with anxiety and stress at such times. OFQUAL’s recent decision to award marks based on teacher’s recommendations and mock results might lead to a new form of assessment in the education sector. All of this could mean an entirely new way of living and working, for the better.

I do not mind admitting that even though I am trying to be positive about this situation, I am frightened. Covid-19 is not just a flu or a cold. It is a serious illness which attacks our respiratory system. The trouble with our World now is that we are so used to being in control of every aspect of our lives, that we really struggle when we are faced with so many, ‘what ifs?’. What if I get the virus? What if my children get the virus? What if the NHS is too full to treat anyone in hospital? What if I die? What if we run out of essentials? There is no way that we can answer these questions let alone prepare ourselves in case they happen. We just have to live our lives as positively as we can over the next weeks and months and follow the advice given by the Government. We have to trust that they know what they are doing.

Modern poet, Kitty O’Meara, who has been called the Poet Laureate of the Coronus pandemic, has written a poem to illustrate that there is, “something of blessing in all suffering.”

And the people stayed home. And read books, and listened, and rested, and exercised, and made art, and played games, and learned new ways of being, and were still. And listened more deeply. Some meditated, some prayed, some danced. Some met their shadows. And the people began to think differently.

And the people healed. And, in the absence of people living in ignorant, dangerous, mindless, and heartless ways, the earth began to heal.

And when the danger passed, and the people joined together again, they grieved their losses, and made new choices, and dreamed new images, and created new ways to live and heal the earth fully, as they had been healed.

I do not think we could find anything more apt to speak about the current time we are living in. Wherever you are, stay safe.