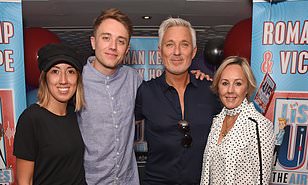 Their son Roman, is a radio DJ and he has recently returned from going into the jungle for the reality show, I’m A Celebrity Get Me Out Of Here. Roman appears remarkably grounded, especially for the child of celebrities. According to Roman, his parents are his heroes and with his sister, Harley completing the family of four, they are all very close. Martin and Shirlie have brought their children up as though they are their friends. The television presenter seemed sceptical of this parenting technique and asked how Martin and Shirlie had disciplined their children. Martin explained that when you treat your children as friends, there is no need for harsh discipline, as the worst thing you can say to a child brought up in this way, is that they have let you down.

Whilst I am not totally convinced about raising your children as though they are your friends, I do agree with some of their parenting beliefs. I believe that rather than shouting at children, it is far better to tell them that they have let you down and you expected more of them. I remember having the discussion with my friend’s teenage daughter once, when discussing the worst thing her Mum could do to punish her for something. She replied, yet again, “To say that she is disappointed in me.”

A couple of weeks ago, I was in the town centre and I came across a man who was talking to his three-year old son. We were sat in a location waiting for our appointments. The little boy was full of energy. He wanted to look at everything. I listened to what his Dad was saying to him in an effort to keep his son still. “Father Christmas doesn’t come to naughty boys.” “You won’t be getting a cake now you’ve behaved like this.” “You shouldn’t do that.” “You are a very naughty boy for doing that.” “Why can’t you just sit still and behave?” I am not someone to judge any parent. I know how hard parenting can be and how difficult it can be at times to shop and complete errands with excitable toddlers, especially towards Christmas. However, this did make me think. The messages that the father was giving to his son, were all negative. He was continually reinforcing by his language choices that his son was a ‘naughty boy.’

I remember seeing a social media influencer once discipline her two-year-old, who was constantly waking up during the night. The morning after a challenging night of disturbed sleep, she kept saying to her child, “You are such a naughty girl for keeping us awake all night.” Again, this choice of language reinforces the belief that the child is naughty. The disruptive behaviour continues, and the child learns that such behaviour gains the reward of attention.

I’ve always tried in both my teaching and parenting to be positive and reinforce positive behaviour. I remember being on one of my first teaching practices and learning that it was more productive to thank the well-behaved children and give them attention, instead of telling off those who were misbehaving. If you are constantly telling off bad behaviour, then it really just becomes an endless cycle of frustration. Most children that misbehave, do it to gain attention, because they have learned that attention-seeking behaviour works.

I work in a private tuition centre, which operates a very different educational philosophy to schools. The students call us by our first names. We don’t force them to do anything that they do not want to do. Our attitude is very much, I am here to help you on your learning journey. It is more cooperative. Homework is there to support what we do in lessons, but it is not compulsory and if it is not done, then we do not punish. On the other hand, the students receive a lot of rewards for working hard. Behaviour is exceptional, because they do not want to upset a teacher who treats them with compassion and is guiding them through their learning journey. Obviously, this can only work in a small tuition centre because class sizes are really small. This would possibly not be ideal in schools where class sizes number about thirty and where there is so much low-level disruption and noise.

I am certainly not the best parent. I have made mistakes and I have sometimes said or done things that I regretted later. I’m currently the parent of a teenager and that is as challenging as raising a toddler. Like toddlers, teenagers are led by their emotions and can respond by extremes of behaviour at times such as storming off, slamming doors and throwing almighty tantrums. Yet it is so important to ensure that we do not respond to this behaviour by demonstrating equal rage. I still believe that ignoring such behaviour is a very fast way of diffusing any difficult situation.

Parenting is far from easy. We never receive parenting lessons before we become a parent. Most of the time, we learn as we go along. We will never get things totally right, but I do think that the language we use to communicate with our children is one area that we should be really conscious of. Whatever we say to them will eventually become their inner voice. We are trying to raise children to become responsible and caring adults. We want them to go onto be good parents too. I recently found an exceptional quotation by author Amy Weatherly that sums this idea up perfectly.

We can’t all be perfect and we can’t always say the correct thing. However, being mindful of the impact of our language can only be a good thing.