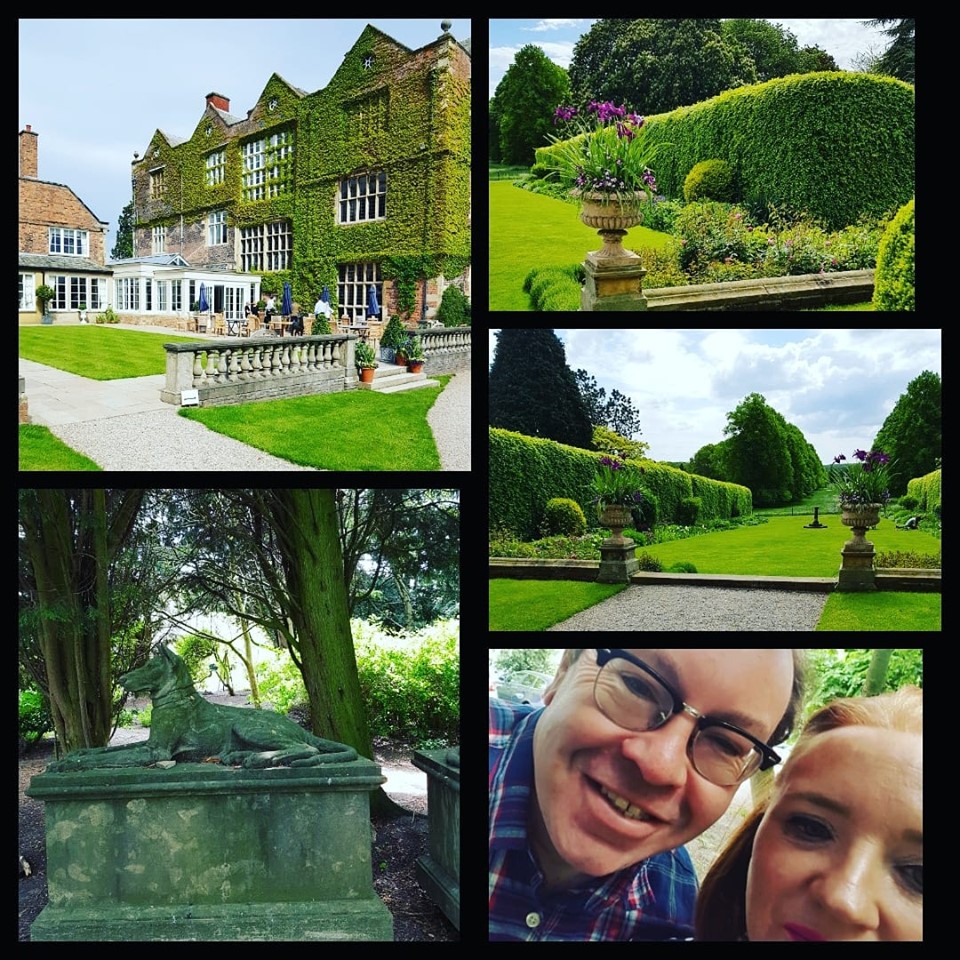 On Friday my husband and I spent a perfect day at Goldsborough Hall in Goldsborough. It is situated just outside of Harrogate and a mile from Knaresborough in Yorkshire. Goldsborough is a very small village that instantly reminds one of how life must have been in a bygone age. There is an old red telephone box, a country inn and a small cricket club. The village is surrounded by fields of rapeseed and every house and garden is beautifully maintained.

First, we visited the church of St Mary the Virgin. For such a small village, this is quite a large church, which is encircled by gravestones and tombs going back several hundred years. We found it fascinating to read the names on the tombs. There is also a standing stone dating back to 500AD where trading took place and taxes were paid.

We then drove into Goldsborough Hall. The car park is set to the right of the house and this entrance affords a breath-taking initial view of the house and the twelve acres of landscaped gardens. Goldsborough Hall is a Jacobean building. It was originally built in the seventeenth century by the acting Lord Chief Justice and High Sheriff of Yorkshire, Sir Richard Hutton. Daniel Lascelles bought Goldsborough Hall and the estate in the 1750s and the entrance gates to the village date back to this time. The Hall became part of the Harewood Estate. The Lascelles family used the Hall as the heirs in waiting’s family home or as a Dower House. It was remodelled in the eighteenth century by the eminent architects, Robert Adam and John Carr, Goldsborough Hall became well-known in the 1920s as it was the first marital home of Princess Mary, the only daughter of King George V and Queen Mary who married the Sixth Earl of Harewood, Henry Lascelles.

Princess Mary made many changes to the house. On the second floor there are stained glass windows, which were a wedding present from the Grand Mufti of Jerusalem. In the garden a vista was created to the south with the planting of the walled terrace, the beech avenue centred around Princess Mary’s sundial and looking on to the Lime Tree Walk, which was planted by visiting members of the Royal family and surrounded by 50,000 daffodils in the spring. To the south east of the formal garden is a copse of Japanese cherry trees which were a wedding gift from the Emperor of Japan.

After Princess Mary left the Hall to live at Harewood, the Hall was turned into a school and then sold off in the 1950s to raise money for death duties. The Hall eventually became a nursing home before being sold in 2005 to The Oglesby Family. When the Oglesby family arrived, the Hall had been derelict for several years and was in a dreadful state covered in Virginia Creeper and with rats and squirrels as its only residents.

The Oglesby family decided to renovate the Hall and what an achievement this has been for them. It must have been a gargantuan task to restore it to its former glory. When you enter the Hall, you are struck by the opulence of the surroundings and the attention to detail is outstanding. Everything seems to be glistening and glowing, especially the iridescent chandeliers.  The Hall is now classed as a historic house and gardens. It is a luxurious stately home for visitors to stay in, a wedding venue and it also boasts a fine-dining restaurant. It is also possible to have afternoon tea, coupled with a historical tour of the House and Gardens. There are places for business meetings and the grounds are also open twice-yearly as part of the National Garden Scheme.

I have visited many stately homes and this one must truly be the most beautiful that I have ever visited. There are so many impressive places to sit in Goldsborough Hall from the impressive wood-panelled Jacobean library, to the light and airy drawing room, a beautiful terrace and a stunning orangery. It was like stepping back in time to a bygone era of glamour and decadence.

It was with a heavy heart that we left to do the school run. As we sauntered up the slight incline back to the car park and turned for one final time to view the spectacular Hall, my husband said, ”I think I know where to bring you now for your special birthday.”

“Oh yes I replied, ”without a doubt.”

If you are looking for a wedding venue, a sumptuous weekend away in a stately home fit for royalty, an award-winning fine-dining experience or just an afternoon-tea in a spectacular location, then you can find out more about Goldsborough Hall by clicking this link.

This blog post is part of my #honest review series. I do not receive any form of payment and therefore you can be guaranteed an honest review.