It’s been a tough week for me. Mega tough. I don’t want to go into the detail of it but when we go through challenging events, it can leave us feeling really exhausted and almost numb with our emotions. We want to do something about how we feel and yet we just don’t have the energy or even the will to do so.

Without giving away too much detail, whilst I was experiencing a very challenging event, a professional treated me in a very troubling and unprofessional manner. Calling into question my behaviour and presenting me a in very different light to how I am. Her comments were unnecessary, and she was trying to prove that she was better than me. I’m not sure why exactly.  I’ve tried to forget about it since but I’m a classic over-thinker and try as I might, I can’t seem to forget about it.

A friend of mine who I have known since school, suggested to me that when I felt better then I should make a formal complaint about how I have been treated. Her view being that as a comparatively strong person, I can ignore what has been said, as I know that it is wrong. Yet this professional person might go on to treat other less confident people in the same manner and that could ultimately lead someone to break down.

I do not want to deliberately cause someone to be upset in their job and I really thought about this. However, my friend is right, you do need to call out examples of someone being unprofessional and unkind, in order for them not to continue to repeat this behaviour to others. In truth, all it boils down to is being kind to people.

There is a great saying that is frequently repeated on those inspirational quotes you see everywhere on Facebook. In a World where you can be anything, be kind. It sounds so simple doesn’t it? Yet why is it that so many people find it difficult?

I remember many years ago when I was working in a boarding school, there was a particular parent who would often attend school events. On the surface she appeared quite a polite and well-mannered lady. Yet she used to have a saying that she would frequently say, “I hope you don’t mind me saying but….” She would then go on to follow it with saying something incredibly rude to someone but claim that because she began with her innocuous remark of not wishing to upset someone, then it was a licence to say some incredibly hurtful things. One day she said to someone, “I hope you don’t mind me saying but you should not be eating those cakes as really you are quite overweight.” In all truth, however she had begun the sentence, was no excuse for her being downright nasty. 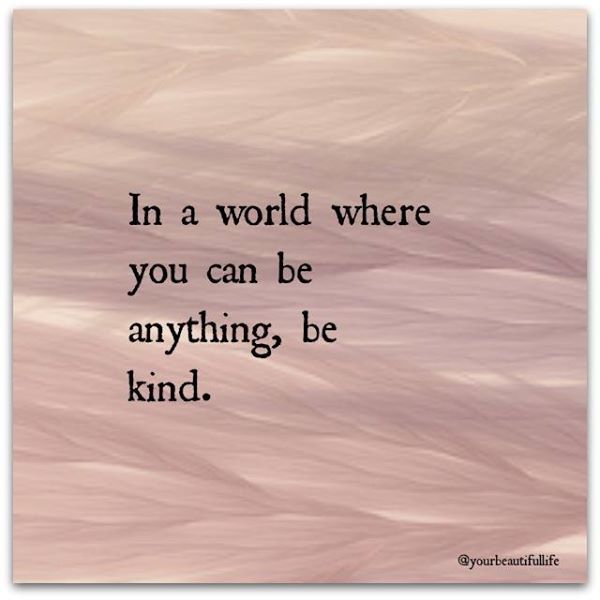 It’s the same with people who begin their sentences with “No offence but…” and then proceed to offend you with some spiteful comment. There is no excuse for saying anything that sets out deliberately to wound someone and that is just what these kinds of sentences set out to do. It’s also the same as people who make comments about your physical appearance and then say it’s just banter or a joke, or even they’re just an honest person who ‘speaks as they find.’  It isn’t a joke, it isn’t excusable when someone is upset.

I’ve never given my children a list of rules to live by. I have only ever told them to treat people as they would prefer to be treated. In our modern age why is it so hard to be kind to people? I can remember watching Bambi and hearing Thumper say, ‘If you can’t say something nice. Don’t say anything at all.’ Perhaps if we all tried harder to put this ideal into action, then we wouldn’t need to make complaints in the first place and we’d all be a lot happier?

5 thoughts on “In A World Where You Can Be Anything…”