As an avid Frank Sidebottom fan, I was really looking forward to the film, Frank. For those of you untutored in the genius that was Frank Sidebottom, in real life Frank was a quasi-cartoon character with a giant papier mâché head, who was still living with his Mum and staying with his Auntie at the seaside in Blackpool, at the age of thirty-five. He was the creation of former one-hit wonder, Chris Sievey: a wannabe pop star who had enjoyed brief success in the seventies as part of the band The Freshies and their catchy hit I’m In Love With The Girl On The Manchester Virgin Megastore Checkout Desk

A larger than life creation, who was half-tormented and half-supported by cardboard characters, Frank would sing cover versions of songs on a rubbish Bontempi keyboard, in which the main lyrics would always be changed to accommodate his home town of Timperley. Such as Bruce Springsteen’s Born in Timperley; the Kinks’s Timperley Sunset and Eddie Cochran’s Timperley Blues. Frank’s use of song lyrics was hilarious. Only he could think of rhyming visa with pepperoni pizza and lama with Bananarama.

The film is very loosely based on Jon Ronson’s experience of playing keyboards in Frank Sidebottom’s Cor Blimey Big Band. I say loosely based. I expected this film to be a biography of Frank. Yet I should have known better really. Frank delighted in the inane and the unexpected and that is where the similarities begin and end in this film. 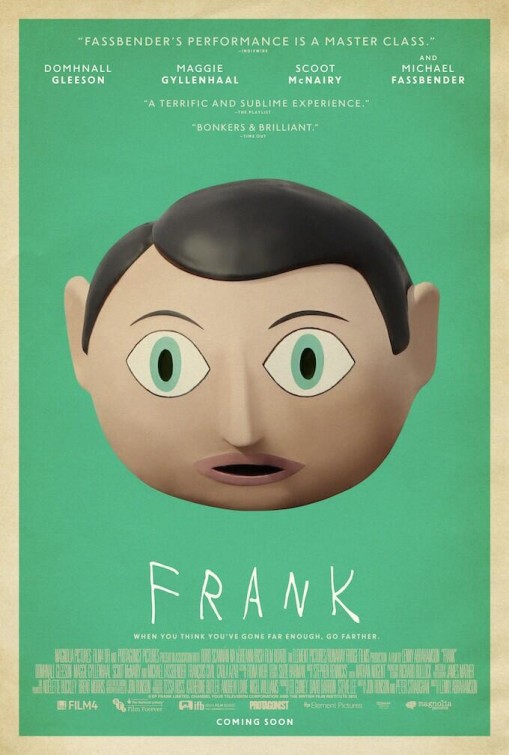 The one anecdote which does have a grain of truth, is how Ronson ended up playing in Frank’s band. Sidebottom was booked to play at London Poly and his usual keyboard player was indisposed. He asked Ronson, the ENTS officer, if he knew how to play the chords, C, D, E. Ronson said that he did and so began a long and somewhat surreal stint in Frank’s band.

I met Jon Ronson many times in the late eighties when my mate used to stalk his band, The Man from Del Monte. He’s a gentle soul and has a kind of ethereal quality about him. He always struck me as being one of life’s great thinkers and this is evident throughout the film. The idea had come from his frustration that the genius behind Frank Sidebottom seemed to delight in being rubbish. Whenever the chance came along for real fame and exposure, Chris Sievey would self-destruct. Ronson remained mystified by this and wanted to write a film based on the premise that there are some people who are just too ‘fantastically strange’ to make it in the mainstream. He wanted to bring in additional elements from other performers such as Captain Beefheart and Daniel Johnston. Ronson had discussed the idea with Chris Sievey prior to his premature death in 2010 and received his blessing.

Thus, we see in Frank, Jon, a young keyboard player played by the incredibly affable Domhnall Gleeson, who becomes immersed in the world of a papier-mâché-headed musician called Frank, Michael Fassbender, and a supporting cast of equally weird band members. Maggie Gyllenhaal plays Clara, the cool, quirky and highly temperamental, Theremin player. As well as Don, Baraque and Nana. Like Sidebottom, the music is comically ridiculous.

The band go to spend time in an isolated cabin in Ireland to record their debut album. Spurred on by a tiny whiff of success, they are then invited to a music festival to perform in Austin, Texas. The plot may be simplistic, but the themes explored in the film are anything but. Jon the character and Jon Ronson are both obsessed with the change which occurs when Frank puts the head on and assumes the character of Frank. For much of the movie we only see Frank with his head on. This leads to some great comic moments such as seeing Frank shower with a plastic bag on his head.

The insightful, first-person voiceover allows the audience to wonder with Jon, ‘What goes on inside that head…?’ Similarly, one starts to contemplate if Frank is different without his head and what has prompted him to mask his true persona? Perhaps it is only in wearing a mask that one can truly express oneself: thus, in deception lies the truth? No one really seems to answer any of these questions during much of the movie and in all honesty these details are irrelevant to the fact that these characters are outsiders to society. That is what makes a true genius; being an outsider. Although this is a comedy, it is a gentle and at times poignant and thoughtful movie. It could have become quite farcical or slapstick, but the director, Lenny Abrahamson is experienced in blending comedy and pathos and turns the film more into a modern fairy-tale or fable, in a way that recalls Tim Burton’s Edward Scissorhands.

I didn’t come out of seeing this movie laughing out loud in the way that I used to laugh during and after a Frank Sidebottom gig. Yet, I did come out feeling moved by the story and understanding more the reasons why Chris Sievey never gained the acclaim that he richly deserved in his all too brief lifetime. Sievey was way ahead of his time and if this film makes more people discover the unadulterated joy that was Frank Sidebottom’s comedy then so much the better. A documentary, ‘Being Frank – the Chris Sievey Story’ has recently been shown at the BFI London Film Festival and a Manchester premier is scheduled for next year. These two films should be shown side by side as a tribute to Frank Sidebottom because they enable us to understand the man and his creation more. You know they do. They really do.