In 1989 I went to spend a year living in France as part of my degree course. I lived in Boulogne-sur-Mer, which is only a hop, skip and a jump away from England. It was thus important to me during that year, that I spent as much time as I could, learning about French culture. I lived as though I were French. I tried every kind of French food that I could. I mixed with many French people and made many friends. I watched only French television and read only French magazines or books. I listened only to French music and went to see films in French. In short, I became French. I even started dreaming in French.  I particularly enjoyed the fact that my name, Elisabeth was also spelt with an ‘s’, in the French style and loved the French pronunciation.

During that year I developed a love of Serge Gainsbourg. I’m sure many of you may have heard of the song, Je t’aime. Moi, non-plus, in which Serge Gainsbourg and his wife at the time, Jane Birkin, simulated sex with breathless sighs and fake orgasms. It was no surprise that it was banned in most countries when it came out in the late sixties. There’s no doubt that Serge Gainsbourg loved to shock and boy did he shock! There is an infamous clip that is frequently shown on all those programmes about when live television goes wrong, from a chat show in the late eighties. Serge was on the panel with the singer, Whitney Houston. He made it quite apparent by his use of four letter English words that he found her incredibly attractive.

Gainsbourg also wrote a song for the Eurovision Contest for the very naïve singer, France Gall, who was a teenager at the time. The song concerned a girl named Annie who likes aniseed-flavoured lollipops and at first appears quite a sweet and innocent song. But Gainsbourg’s lyric contained many double meanings referring to oral sex, such as a line about barley sugar running down Annie’s throat. But there is far more to Serge Gainsbourg than his need to shock. To look at, he appears to be the archetypal greasy and lascivious Frenchman that your mother warned you about. Yet everything about Gainsbourg was never what it appeared to be on the surface. Admittedly, the lyrics to his music often used clever word play for the sake of provocation, satire and rebellion against the social cultural and sexual norms of the day. However, beneath all his sexual innuendos and need for attention, lay a very sensitive man, who was capable of writing some of the most beautiful lyrics and melodies ever written.

Gainsbourg was born the son of Jewish, Ukrainian immigrants in France in 1928. His parents had escaped from Russia during the 19717 Revolution. His father was a classically trained pianist and so it was no surprise that the young Serge was taught to play. Serge’s childhood was traumatic, owing to the Nazi occupation of France and being Jewish. Gainsbourg was a talented artist but he had to earn his living by playing the piano in night-clubs. Gainsbourg began to write songs and these were very much in the style of the old French story-telling ‘chanson’. Many of his songs have an unusual take on life concentrating on the mundane. For example, in 1958 he wrote a song called Le Poinçonneur des Lilas about a weary ticket puncher on the Underground who punches holes continuously and has a circus of confetti in his head.

Gainsbourg struck up a partnership with the French singer, Michèle Arnaud and thus began his career. It was the winning entry in the 1965 Eurovision contest Poupée de Cire. Poupée de Son – sung for Luxembourg by France Gall, that really made his mark and even as recently as 2005, it was voted one of the best Eurovision songs. The song, was the first Eurovision pop song and like much of Gainsbourg’s work, had a double meaning. The title ‘Puppet of Wax’ suggested that France Gall was just a puppet controlled by the great puppet-master himself, Gainsbourg. The song sold over five hundred thousand copies.

Gainsbourg became a popular composer and lyricist as well as an actor and television personality. He wrote and sang with such famous actresses as Brigitte Bardot on several popular songs of the sixties including Bonnie and Clyde and Ford Mustang. As well as with Catherine Deneuve on my favourite song, ‘Dieu est un fumeur de Havans’ in which he writes that he knows God spokes Cuban cigars, even at night, from the grey clouds in the sky whereas he merely smokes Gitanes. Gainsbourg also wrote soundtracks for over sixty films.

As he became older, much of his work became more eccentric including the song ‘Inceste de citron’ – lemon incest, with his daughter Charlotte. Again, written to scandalise. Gainsbourg drank and smoked heavily and he had started to become something of a liability on live television as he was frequently inebriated. It was a miracle that with such a lifestyle, he lived to sixty-three. He died of a heart-attack in 1991.

Gainsbourg is now perceived as a legend in France and in the English-speaking World. Many artists have spoken of his influence on their music. It is no surprise that his Parisian home is now treated as a shrine.

If you have never heard of Gainsbourg then I really do urge you to seek him out  and discover why he is perceived as such a legend in the World of Music. 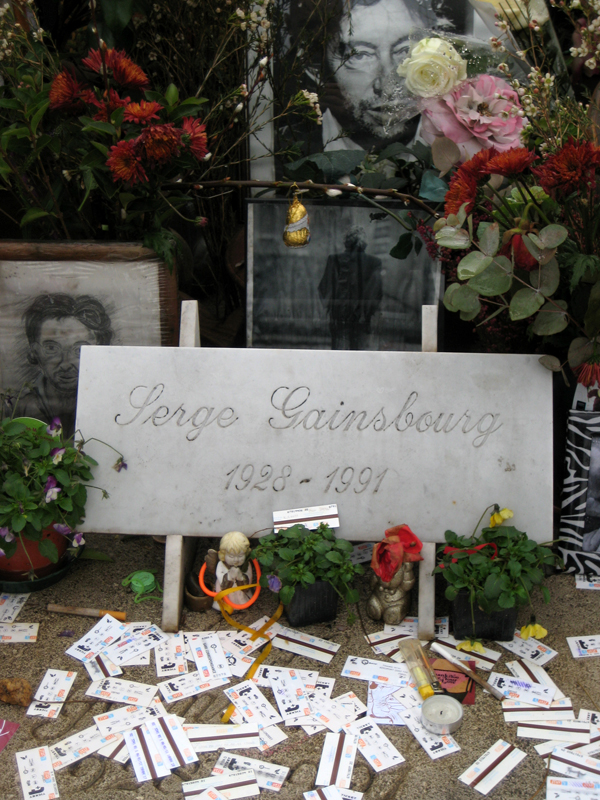