I’m still not sure what first attracted me to the papier mâché-headed, comedy legend that was Frank Sidebottom, but suffice to say that I have been a fan of his since I was eighteen. I think it was probably his child-like view of the World that I empathised with. A cartoon character, who was still living with his Mum and staying with his Auntie at the seaside in Blackpool, at the age of thirty-five. A larger than life creation, who was half-tormented and half-supported by cardboard characters such as Little Frank, Amoeba Frank, Little Buzz Aldrin – the American space Puppet, and Little Denise – who was always missing a head. Or perhaps it was his cover versions of songs in which the main lyrics would always be changed to fit in Timperley? Such as Bruce Springsteen’s  Born in Timperley ; the Kinks’s Timperley Sunset and The Timperly Blues. Frank’s use of song lyrics was also hilarious. Only Frank could think of rhyming visa with pepperoni pizza and lama with Bananarama.

There’s a statue to Frank Sidebottom in the centre of Timperley. There’s also been an American film, Frank,  based on Jon Ronson’s experience of playing in his Cor Blimey Big Band.  A film supported by his loyal fans entitled, Being Frank: The Chris Sievey Story is about to be released at the BFI London Film Festival in October. It’s also been shown in 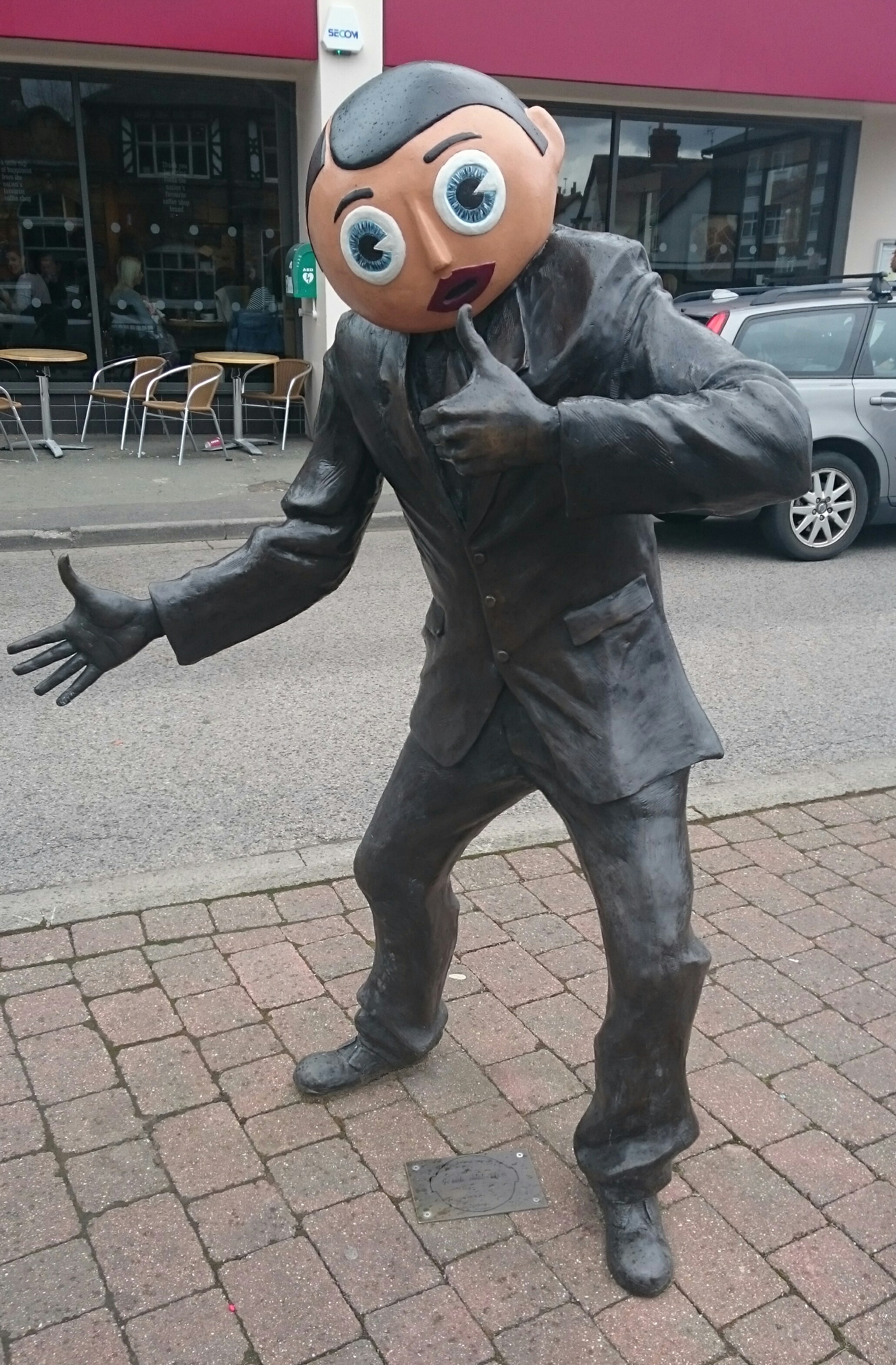 Texas. Yet in spite of this, he still remains a kind of cult legend. It is rare to meet Frank fans.

Frank Sidebottom was the comic creation of Chris Sievey. Chris was a musician known for fronting The Freshies band in the late 1970s and early 1980s. He created Frank in 1984. Frank, was portrayed as an aspiring pop star from Timperley outside of Greater Manchester, who wanted to break into ‘show business’. Like a character from a bygone age, Frank was always jolly and supported by his puppet, Little Frank, who he enjoyed tormenting. Part of the comedy of his routine was that Frank would treat Little Frank as though he was real. But when Little Frank pointed out Big Frank’s failings, he would joyfully declare to the audience,’He’s only a cardboard cutout!’

It was just over thirty years ago today that Frank brought out his album 5:9:88, which was meant to be followed a week later by 13:8:88 but in the end it came out much later and that miscalculation summed Frank up. He delighted in being rubbish but in being rubbish he became extremely funny. There was a childlike simplicity to his jokes and his routines. Many famous people such as Caroline Aherne, and Mark Radcliffe started out as supporting characters in Frank’s World. They would go onto greater things and more celebrity and yet Frank remained relatively unknown, apart from in the Manchester area and within the student community. His humour was wholesome and a lot of the time incredibly silly. You either got him or you found him totally bizarre.

But Frank was hugely ahead of his time and a unique talented artist, who predicted the importance of video and animation. He would spend hours creating fanzines, posters and props. All with a hint of childishness and simplicity. Sadly, his comedy never quite translated to television and when Chris Sievey died in 2010, he died in poverty.

At the age of nineteen I was fortunate to meet him at Hull University prior to a gig. He wasn’t Frank but Chris Sievey – without the giant head. I could tell that it was Frank from his voice and mannerisms and so, buoyed up by a pint of cider, I approached him and told him who I thought he was. For about twenty minutes, he maintained the facade that he had absolutely nothing to do with Frank Sidebottom. He seemed to delight in this scenario. Taking joy from playing out this charade that Frank was a real person. His parting shot to me had been to tell me to try and stand at the front of the hall by the stage. It was one of the best nights of my life as Frank sang Fireball XL5 to me.

Whenever my Dad would drive me back to University in Hull after the holidays, I would put my tape of Frank on for us to listen to. I must have played it that many times, that I can recite whole chunks of his albums still, which my husband has always found incredibly impressive. But it shows how loyal Frank’s fans were and how much they loved his comedy.

I treasure my signed Frank records and I even have a life-size Frank head in my living room as a tribute to a man who has given me many laughs over the years. If you’ve never heard of him then do check him out on YouTube. As Frank would say, ‘You know you should. You really should.’

2 thoughts on “It was thirty years ago today …. You know it was. It really was.”