It is no exaggeration to say, that pretty much every modern cultural icon of fashion, art or design, has been influenced in part by the relatively unknown Leigh Bowery. From Lady Gaga to Grayson Perry, John Galliano to Boy George and Lucien Freud to Alexander McQueen. Boy George was so influenced by Leigh that he wrote a musical, Taboo, with him as a larger than life, central character. Some of the most expensive paintings ever painted by Lucian Freud were of Leigh Bowery. Many fashion shows of designers such as Alexander McQueen and John Galliano owe much of their flamboyance and idiosyncrasies to Leigh, reflecting his impact on the worlds of fashion, art and music.

Never one to adhere to categorisation, he was in equal measures: a performance artist, a fashion designer and seamstress, a musician, an artist’s muse, a club promoter and an artist. Yet more than anything else, he loved to push boundaries and to shock. I find his story fascinating and yet incredibly moving. He was a revolutionary; constantly reinventing himself so as not to stagnate. He turned life into a performance. Sometimes bordering on the obscene, other times bordering on genius, yet always inimitable. As a designer, his greatest fear was that someone might attempt to copy him. Born in 1961, he grew up in Australia in a very traditional and religious family. In 1980 he moved to London where a new movement, the New Romantics, was about to take the club world by storm, resulting in an explosion of over the top ostentation and glamour. The look was frequently androgynous. Bowery frequented The Blitz club and other clubs of the period, dressed in outlandish outfits such as his ‘Pakis from Mars’ outfit in which he blended the idea of extra-terrestrials with Asian culture. His face was covered in blue like Vishnu the Hindu deity, and heavily adorned with piercings. He wore beautifully tailored outfits suggesting a fusion between New Romantic clothing and Buddhism.  It wasn’t long before he attracted the attention of The Face magazine and featured regularly within its pages in his different looks. By 1985, he had created his own club, Taboo, with the catch-line, “Dress as though your life depends on it or don’t bother.” Taboo blurred the lines between sexuality and was known for its hedonism and heavy drug use coupled with a highly unusual backing soundtrack. 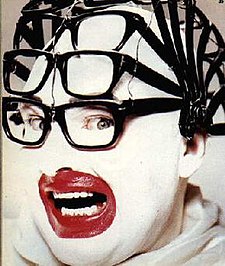 To many, Bowery’s looks appear on the surface, to be quite ridiculous. Yet there is far more to them than just the notion of trying to shock or outrage. Bowery was an expert in transforming his physique by using tape, pins, prosthetics and wigs. He even declared at one stage that flesh was his favourite fabric.

One of my favourite looks of his was the orange spot man. He appears in a dandy-esque outfit. There are orange spots on his face, clothing and shoes. Yet looking closer at the outfit reveals a beautifully tailored couture suit. The cut is always flattering to his shape, whether he is masquerading as a woman or as a man.  Bowery presented several fashion shows as well as performing as a musician and performance artist. In 1988 he spent several weeks at the Anthony D’Offay Gallery, living in the gallery window as a living piece of art. He also designed collections for a ballet company. 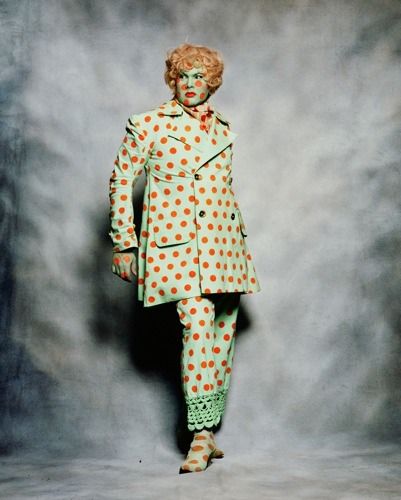 Yet perhaps the most ironic aspect of his fame, is that he is most known for the nude portraits of himself by Lucien Freud. For the first time, Leigh is seen devoid of his make-up, costumes and props. The paintings are known for their stark realism. Although Bowery is naked in these portraits, they share the same questions as his own works of art, as they continually question, subvert and challenge our own views on the purpose of art and our own notions of aesthetics.

Leigh Bowery’s dazzling flame of life was sadly extinguished far too soon in 1994 from an AIDS related illness.  Yet one cannot deny the influence his all too brief career in the spotlight has had on the worlds of fashion, design, music, art and nightclubs.

Leigh Bowery: The Life and Times of an Icon  1997 Sue Tilley