Today is #BookLoversDay and so it seemed an apt occasion to write about my favourite author and series of books.

As a child I grew up with reading. My parents read a lot and that habit was passed onto me and my brother. They also read to us a great deal. I can vividly recall my Dad reading Gulliver’s Travels to us at bedtime. He also used to read The Broons and Oor Wullie cartoons with funny voices.

My Mum was really into biographies and art and design and so she would take books out of the library on such people as Barbara Hulanicki or Gloria Vanderbilt and would then let me read them after she had finished. Biographies are still my favourite genre.

I have passed this love of reading onto my children too. They were both exposed to books early on. Some of my favourites to read to them were The Tiger Who Came to Tea and Monkey See. Monkey Do as well as Six Dinner Sid. They also enjoyed audio books and they would see me reading all the time. My daughter is only eleven but loves reading YA books and my son reads history and science-fiction.

There is one book that has stayed with me since I was a teenager. Both my children have read it and equally enjoyed it. Only last night, my daughter was watching the DVD of the television series and couldn’t stop laughing. My son has read the entire series like myself. That book is The Secret Diary of Adrian Mole and was written by Sue Townsend in 1982. There have been many sequels and by the last one, Adrian was well into his forties. Yet to me, Adrian Mole was like a friend who grew up with me. I didn’t see him often but when I did, it was always great to catch-up with him. Sadly, Sue Townsend died in 2014 and it has been hard to accept that I will never get chance to spend time with Adrian as he enters his fifties. 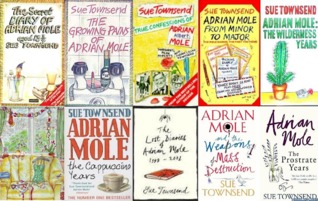 Adrian Mole was a revolutionary book in its time. These were the days before Jaqueline Wilson. Adrian was different to other book characters. He was a teenager, (only a few months older than me) and he experienced the same feelings that I did. He had spots, teenage angst and an awful lot of unrequited love for the rather unpleasant Pandora. He was always embarrassed by his parents and somehow no matter what he did, it always felt as though life and fate were conspiring against him. He was the creator of the teenage ‘woe is me’ attitude. He despised his dysfunctional parents who never appeared to understand his supposed intellectuality.

Some of the ideas Sue Townsend came up with for Adrian were pure genius. Pandora eventually became a ‘Blair Babe’. At one stage Adrian was a chef in a trendy restaurant in Soho specialising in offal before it became an oxygen bar. Adrian dealt with some complex issues such as separation and divorce, unexpectedly discovering he had fathered a child, along with poverty, homelessness, cancer and death. Yet despite this, Sue Townsend was always able to add humour as well as poignancy.  Adrian was annoying at times and often timorous, but he was immensely likeable if not lovable.

I have also read all of Sue Townsend’s works including the little-known Rebuilding Coventry, about a woman who is accused of murdering her neighbour by hitting him on the head with an Action Man. Sue Townsend was always ahead of her time in her writing and in the questions she asked as a writer. Her novels were often built upon an amusing premise such as the Royal Family being forced to live on a council estate. Yet they never patronised the reader and often sparked interesting debates centering on politics along with many taboo subjects. She wrote the novel Ghost Children dealing with subjects which in those days were hardly spoken of, such as child abuse, miscarriage, and a woman’s self-esteem.

Her premature death upset me a great deal, not just for the loss of Adrian Mole but also when one considers the work she could have gone on to produce. The University of Leicester holds her literary archive in its library and I recently paid them a visit. The librarian told me that she was a prolific writer and Adrian Mole was a mere fragment of her writing output. It’s been a while since I spent time with Adrian and if I’m honest then I’ll admit that I’m really starting to miss him.

I’d love to hear what your favourite books or authors are on #BookLoversDay. Please feel free to let me know in the comments below.